The Tooth. The Whole Tooth. And Nothing But the Tooth.

With the Fourth of July upon us this year of 2016, I think now is an appropriate time to uncover some fun facts regarding our nation’s founding father and first president, General George Washington. We all know that 240 years ago, this legendary man of iron will and brute physical strength led our great nation to its independence from British control. But did you also know that George Washington struggled with failing teeth, inflamed gums, and ill-fitting dentures throughout his entire adult life?

At age 24, Washington recorded paying 5 shillings to a “Doctr Watson” who pulled one of his teeth. He wrote diary entries of his aching teeth and problems with his dentures and recorded several payments for toothbrushes, denture files, and toothache medications in his communications manuscripts. So it isn’t surprising that records exist of him receiving dental treatment even during the Revolutionary War.

In 1781, a French dentist named Dr. Jean-Pierre Le Mayeur escaped from the British-controlled territory of New York City and found his way to the American lines. Although Dr. Le Mayeur previously worked for the British officers, he grew distasteful towards them and thus began supporting the American cause. Washington then sought him out for dental treatment and eventually established a great relationship with his new dentist!

That same year in 1781, Washington learned that some of his mail – including a personal note requesting some dental cleaning tools – had been intercepted by the British. Although he was mortified this information had leaked (Washington was very private about his dental troubles), he was able to use this to deceive the British. In a letter to his dentist, he wrote that he “had little prospect of being in Philadelph. soon” and thus had requested for his dental supplies to be sent to New York instead. When the British commander Sir Henry Clinton saw this message, he assumed Washington would not move his American and French forces that were surrounding New York down to Yorktown because he thought he would still remain in New York for his dental package to arrive. However, Washington and the French Commander, Comte de Rochambeau, together planned to attack British General Charles Cornwallis at Yorktown anyway. Britain’s decision to not reinforce troops at Yorktown ultimately let to the surrender and siege of Lord Cornwallis at the infamous Battle of Yorktown in October of 1781.

Another interesting fact about George Washington’s teeth is that he tried to save those that were pulled in a drawer of his desk in Mount Vernon so they could be used for a future denture. He was very aware of his failing dental health. In 1782, Washington wrote his distant cousin Lund Washington requesting his teeth be wrapped up and sent to him in Newburgh, New York. Washington also had history in his accounts of purchasing 9 teeth from “Negroes” for 122 shillings, either to become future implants or teeth for his dentures. It is unknown if these were ever utilized as intended, but Washington clearly took an active role in treatment planning his dental care!

Sadly, by the time the Revolution was over and Washington was set for inauguration in 1789, only one single tooth remained in his mouth. Dr. John Greenwood was the dentist who had the honor of pulling out this last remaining tooth in 1796, who also saved the tooth in a glass jar as a trinket and hung it from a wrist chain. Washington was very self conscious of his dental conditions and artists even noted several changes to his face, jaws and mouth as he lost more and more teeth. It is understood by historians that President Washington did not like to speak much and many assume it was because of his sensitivity towards his dentition.

President Washington went through numerous appliances, dentures and contraptions made from all sorts of materials: bone, human teeth, hippo ivory, lead, gold wires. Contrary to the popular myth, his dentures were never made of wood. Despite all efforts to make a good prosthesis for the first American President, Washington repeatedly wrote to Dr. Greenwood to express his frustrations with his dentures. In one letter in 1797 he wrote that his dentures were “already too wide, and too projecting for the parts they rest upon” and complained that they made his lips bulge out too far.

While in dental school at the University of Maryland, I had the opportunity to visit the National Dental Museum in Baltimore and saw one of President Washington’s dentures in person. Anyone who sees this could appreciate the discomfort he went through in putting those in his mouth day to day! Historically, those dentures went through war, fought battles, and ultimately saw a nation be born, which is incredible. Clinically, however, those dentures were obviously very archaic and it is understandable why they were ill-fitting to a modern day dentist. It really does make me sad to think that the very first president of America – one who led our country to freedom, one who added five new states to the union, one who remains to be the only president in US history to be unanimously elected by the Electoral College (twice) – was ashamed of his smile. Nevertheless, this weekend we celebrate the Fourth of July – America’s independence and birthday – and we should all smile just because we can and have the freedom to do so. And while I watch the fireworks go off over the fabulous Las Vegas strip, I’ll let myself daydream of how cool it would be to travel back in time with my mixing bowl and impression material to hook up the Prez with some premier acrylic dentures with a soft reline. And this is how he would smile. 🙂 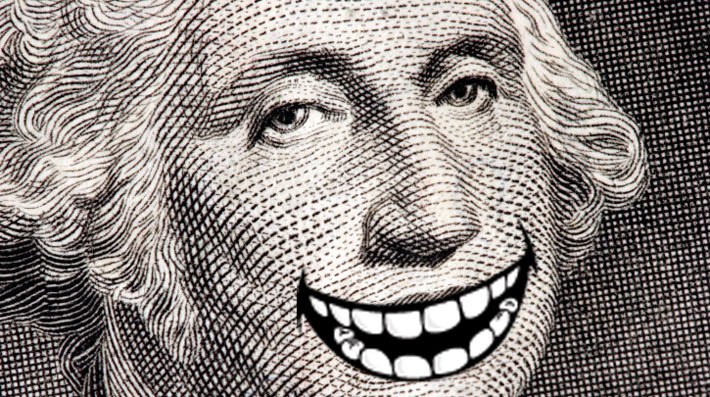 Dr. Grace Chung graduated from the University of Maryland Baltimore College of Dental Surgery. She completed multiple post graduate dental education courses including a one year maxi-residency course in implant dentistry through the American Academy of Implant Dentistry. She performs all areas of general dentistry and is certified in the use of laser treatment in the state of Nevada. Dr. Grace is originally from New York but has traveled and lived all over the world. She is a graduate of the United States Military Academy at West Point and subsequently served 6 years of active duty as an Army Medical Service Corps Officer. She was stationed primarily in Germany throughout her military service and completed a one year deployment to Iraq in 2005-2006, but has spent time also at FT Rucker, AL, FT Sam Houston, TX, and FT Meade, Maryland.